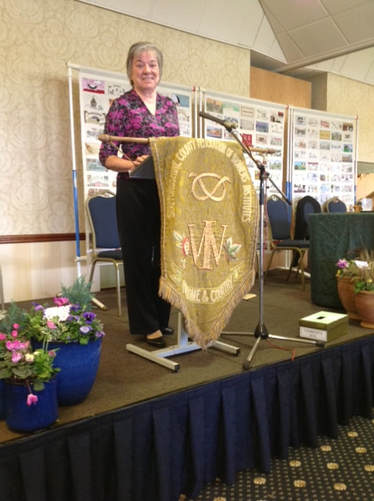 Inspired by the story of one of our member’s grandsons, who needed a kidney transplant in order to save his life, Laureen Walker and Mandy Bailey embarked on a mission to raise awareness of the shortage of suitable donor organs. The stark statistic is that three people die every day in the UK whilst on the organ transplant waiting list. Many of these are young just like Betty’s grandson.

Laureen and Mandy spent many hours researching the subject of organ donation and speaking with the dedicated transplant team at North Staffordshire Hospital. Eventually the wording and background briefing emerged and was submitted for consideration. After a lengthy process it ultimately became the winning resolution and was adopted at the Annual Meeting in Leeds on 7th June.

The resolution states: “The NFWI notes that three people die every day whilst waiting for an organ transplant. We call on every member of the WI to make their wishes regarding organ donation known, and to encourage their families and friends, and members of their local communities to do likewise.”

Discussing the issue with your family before signing up to the organ donation register is very important because only 30% of families are willing to agree to donation if they do not know their relative’s wishes.

We hope that readers of this site will also consider the issue seriously and if, after talking to their family, they do decide they would like to donate their organs after death to register the decision on the National Organ Donation Register.

​The Government in England intends to change the law on consent for organ donation.

Under the current system, people who want to donate their organs ‘opt in’ or agree to donate after their death by signing up as a donor on the NHS Organ Donor Register and telling their family their decision.

If the person had not recorded a decision to donate, then specially trained nurses sensitively provide information to their family to help them to reach a decision about whether organ donation should go ahead.  More than 1,000 families say no to organ donation every year, many because they do not know what their loved one wanted.

The opt-out system
​
Under the new system (commonly known as ‘deemed consent’ or ‘opt out’), everybody would be considered a potential donor unless they have added their details to the NHS Organ Donor Register to say that they do not wish to donate their organs, or are in one of the excluded groups.

The aim of introducing a new system is to ensure that the overwhelming public support for organ donation is underpinned both within the legal system and in the NHS, and that a person’s decision to donate is upheld whenever possible.

The Government has indicated that the new system may be in place from April 2020.